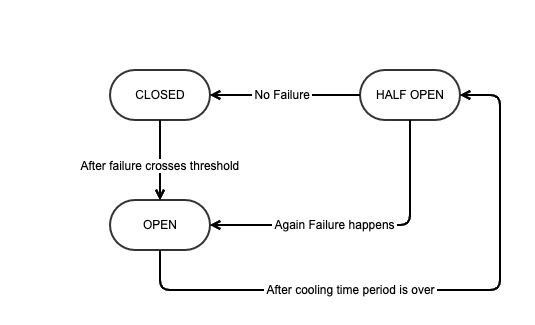 The closest circuit breaker that we can relate to in our daily lives is MCB, which is present in every home to protect devices from electrical circuit failures which could lead to increased flow of current beyond a specific capacity. It achieves protection from high in-flow of current by disrupting or opening the circuit to stop the flow.

Let’s consider we have microservices A, B and C. Assume that A calls B and B further calls C. Now, if at any point of time, if C experiences some issues (like CPU usage is high, or service is down) due to which it takes long time for responding. This can lead to issues in B as C’s response time has increased, which will lead to resources (threads) at B being occupied for a longer period of time. This will further slow down the responses from B to A also. Such failures are called cascading failures. So these cascading failures should be handled to prevent them from translating to other services and causing failures.

OPEN state helps in preventing cascading failures by forbidding any requests to downstream service, thus not blocking any resources in the current service. Further, a fallback method can be defined to gracefully handle negative scenarios.

In another article, I have discussed how to build basic circuit breaker. Please go through it.